Software RAID Reveals Opportunities of the NVMe for Enterprise-Grade Tasks

NVMe protocol has significantly expanded data centers opportunities. New drives not only keep all features of the traditional SSDs, but also bring a brand new level of performance and latency.

Due to their functional characteristics, NVMe drives are the right choice for the range of top-notch technologies. OLAP, OLTP, ML & AI, advanced ERP applications, and autonomous production lines still demand a lot of long-term investments, but with NVMe that becomes easier and more affordable.

At the same time, there are some tangible reasons that restrain NVMe drive wide distribution. All of them are very substantial for the storage vendors and system integrators. For NVMe in enterprise-grade data centers two things are crucial: the ability to work within fault-tolerant RAID for data protection and the opportunity to use NVMe-oF as a transport to network-attached drives.

Existing software or hardware RAID technologies either use excessive redundancy in array mirroring or lose up to 65% of the performance in RAID 5 or RAID 6. And not all of these solutions have an ability to support NVMe-oF for network access.

RAIDIX ERA is a software RAID developed with close attention to NVMe features. RAIDIX innovative technologies and focusing on the new protocol’s strengths make our software RAID engine capable of demonstrating up to 97% of the total drives performance in RAID 6 and lower latency even for mixed workloads.

In this material we will outline the key NVMe features, evaluate its strengths and weaknesses, and present RAIDIX ERA opportunities and scenarios for work with different applications within enterprise-grade storage infrastructures.

For the flash memory all these commands are too complicated and redundant. SAS and SATA protocols get access to the data through the hard drive native procedures, ignoring physical traits of the flash memory. NVMe in contrast uses flash drives physics to increase total performance of the media.

NVMe is built over the PCIe interface. The protocol natively employs the PCIe command set used by applications to communicate with CPU. In this approach, the HBA stage between drives and CPU is eliminated and the data path is reduced by eliminating SAS/SATA commands adaptation for PCIe bus.

Figure 1. Comparison of the AHCI and NVMe interfaces

Moreover, NVMe drive controller is able to transfer data to CPU using more than 65K queues and 65K commands/queue. SATA/SAS interfaces support only one queue with 32 and 254 commands respectively.

This allows NVMe SSDs to demonstrate two times less latency and several times more read and write speed for mixed and random workloads than traditional SSDs. That’s why NVMe drives form the good basis for such speed-demanding technologies like AI & ML, OLTP, Edge computing and others.

NVMe SSDs have undoubted advantages over SATA/SAS SSDs by means of its direct connection to the server with PCIe bus. But local drives usage is suitable for a very limited range of business tasks. Most of the enterprise-grade data centers need the high-available solutions with flexible scaling and resource allocation.

To review all points of the technology, we should look at this in the context of network environments, where common past-gen protocols eliminate all NVMe performance advantages. The solution for this issue is NVMe-oF extension for NVMe, which allows to use the new protocol with the Ethernet, Fiber Channel and InfiniBand network transports.

NVMe-oF connects application on the server and remote NVMe array at almost local latency rate. This technology is also expected to keep high performance of the NVMe drives for the network infrastructure, but now there is no chance to evaluate it, because modern network adapters still work as a bottleneck for the whole data path.

But anyway, to implement NVMe technology to the enterprise data centers, NVMe-oF support in hardware and software components of existing storage infrastructure is necessary.

Talking about NVMe usage beyond the market of consumer devices, we can see that almost all scenarios need a fault-tolerant RAID to protect data in case of drive failure. This can be achieved by using either a RAID engine in the software layer or hardware RAID controllers with direct drives connection. And RAID 5 or RAID 6 will be the most cost-effective choice here.

In RAIDIX we’ve developed RAIDIX ERA — software RAID for NVMe and SSD drives in which parity calculations are performed with regard to all opportunities of the new media. That makes an array provide up to 97% of the sum NVMe drives performance.

RAIDIX ERA is presented by Linux kernel module, which combines flash drives into array and delivers it to a client as a block device. POSIX API support makes it appropriate for many use cases, eliminating the need to adjust apps and file systems.

I/O handling parallelization and lockless datapath in RAIDIX ERA allow to remove array internal barriers and deliver unprecedented performance up to 10M IOps and 55 GBps for a single RAID. This software RAID is also able to keep high performance level and low latency (< 0.5ms) even in mixed workloads.

To protect data, RAIDIX ERA provides you with a wide range of RAID levels: RAID 1/0/5/6/7.3/50/60/70. Moreover, drive failure causes a low performance loss which helps your business applications run smoothly. That comes from an innovative approach to erasure coding calculations. 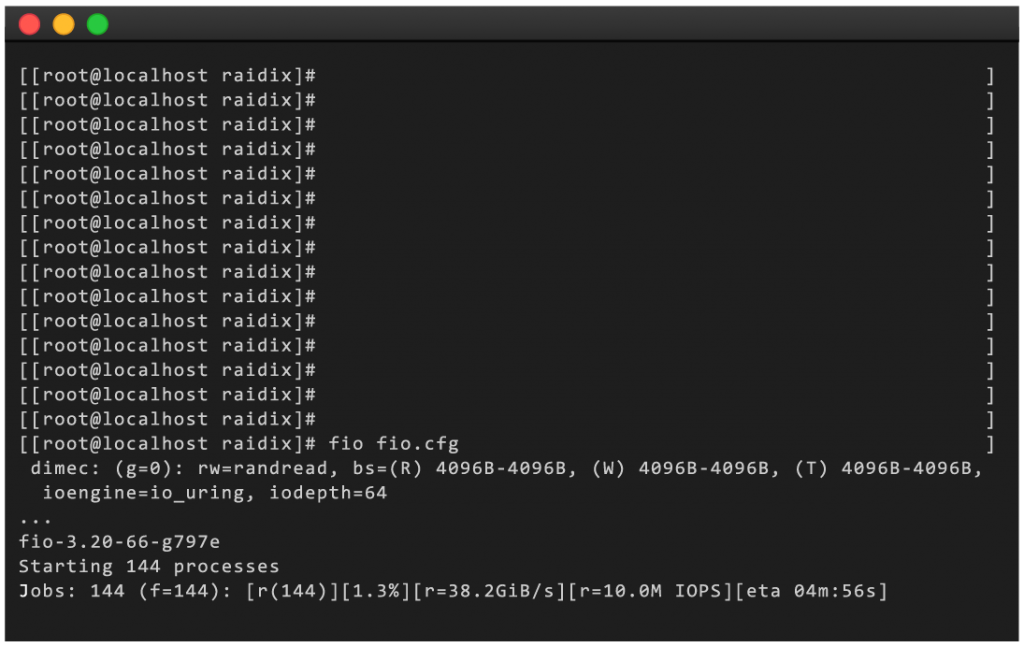 RAIDIX ERA vs Other Solutions

We have developed RAIDIX ERA with a clear vision — to build the fastest software RAID in the market that is suitable for many existing infrastructures. It works well with any flash drive from any vendor, has no limitation by server platform and can be easily embedded as a part of a complex storage solution.

RAIDIX ERA makes a highly performant and fault-tolerant array from NVMe drives. It’s a perfect choice if you need to run demanding enterprise-grade applications which require low latency and high bandwidth of your back-end infrastructure.

Databases for Analytics and R&D

Analysis of big volumes of data is a key part of the effective decision making in modern enterprises and for conducting massive scientific projects.

Most analytical applications for these purposes have a typical workload pattern to the storage: small and regular write requests and large data read requests. Due to high bandwidth (up to 55GBps) RAIDIX ERA can deliver data payloads to analytical applications faster than other solutions. That reduces data processing time and improves total workflow efficiency.

NVMe array powered by RAIDIX ERA as a backend device delivers minimum response time for intensive transactional requests and allows applications to make more IO per second. At the same time, it keeps a high performance rate even in mixed workloads.

8K resolution, HDR and increased up to 60fps video frame rate significantly raise the requirements to technical equipment of the post-production studios. In this environment, video storage is a bottleneck of the whole infrastructure, as the bandwidth has not only an impact on the production speed and general convenience of the workgroup, but also on security from frame drops during the editing process.

Edge Computing is one of the most popular ways to perform industrial IoT (Internet of Things). In this approach, computational resources of the system are deployed in immediate proximity to the sources of data — the sensors of the active unit. As an example, Edge Computing works in autonomous driving solutions, feeding traffic data to AI applications with extremely low latency.

RAIDIX ERA is used as a part of mobile computational platforms for autonomous vehicles. It manages an NVMe array and provides the lowest response time and robust performance even with a limited number of drives.

To save performance potential of NVMe drives in fault-tolerant array, we’ve developed RAIDIX ERA — powerful software RAID which demonstrates high speed and low latency even in mixed IO workloads. At the same time, it easily can be embedded in software environments of existing solutions and is compatible with a wide range of drives and server platforms.

For enterprises, RAIDIX ERA unlocks the opportunities of top notch technologies with no extra investments in excessive infrastructure hardware. For storage vendors and system integrators, RAIDIX ERA is a simple and affordable way to get technological advantage for building NVMe solutions.