The value of relying on closed-circuit TV (HD CCTV) to enforce traffic laws and ensure public safety is uncontested. Surveillance cameras make people feel more secure and fines from traffic violations that they capture can be a substantial source of revenue for metropolitan areas. Yet ubiquitously deploying cameras presents substantial IT challenges.

Take the case of Yongin, the fastest growing city in South Korea. Spanning an area nearly as large of Seoul, Yongin deployed 2,000 video cameras to catch daily traffic infractions and bolster public safety. At the data center in city hall, the CCTV system stored the video for at least one month using five racks of storage devices that consumed an entire room. However, the cameras recorded only standard definition video, which made reading license plates or identifying faces difficult. To address this problem and elicit revenues from fines, the city needed to deploy high-definition (HD) cameras.

The challenge lay in the potential cost of upgrading the city’s CCTV storage infrastructure. HD video contains four times the data of standard video and requires four times the storage capacity. Yongin seemed to have only two alternatives, both of which were impractical. It could install another fifteen racks of storage systems in addition to the five it already had, which would consume even more space in its data center. Or it could obtain much greater disk density with a very expensive, high-end, enterprise storage array. Either approach greatly exceeded its budget.

“Yongin’s legacy system already had scalability and efficiency issues that resulted in frequent storage overloads and lost revenues,” said Gabriel Kang of ITservices, an IT provider for Yongin. “But Yongin couldn’t afford entirely hardware-based solutions with the performance and capacity to handle thousands of high-definition video feeds”. 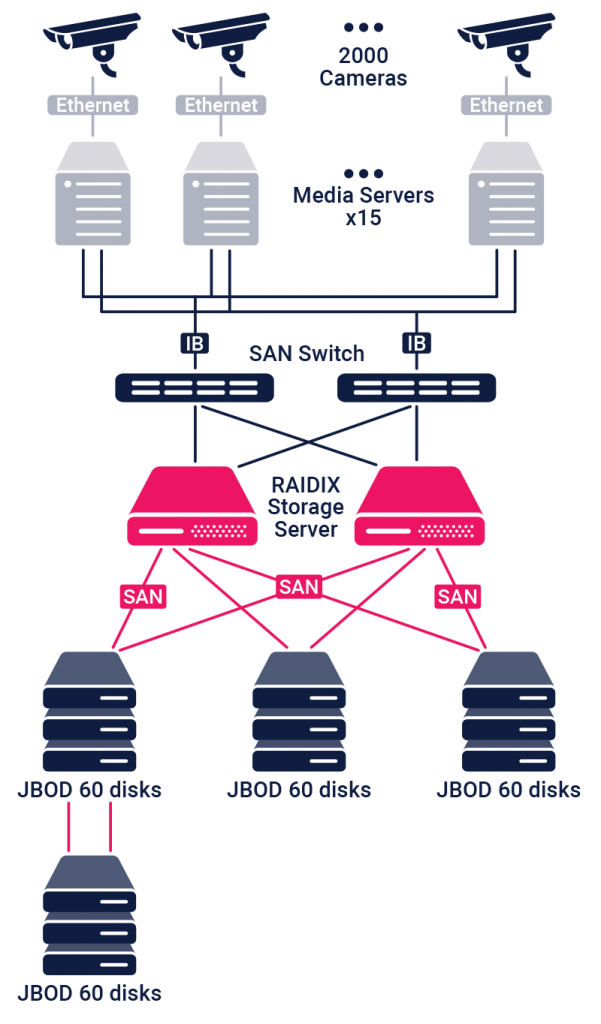 “Most RAID controllers support 16 or 32 disks in an array and pricey, top-tier platforms support 32 drives in general, but the RAIDIX software supports up to 64 drives for an array,” explained Kang. “This capability allowed us to construct a high-density storage cluster with affordable, off-the-shelf components instead of paying for expensive, high performance RAID cards used in hardware-based RAID systems.”

The city replaced 2,000 video cameras with HD units that stream video via Ethernet to 15 Windows Media servers at the data center. The servers forward the data to two Mellanox switches, which link via InfiniBand SRP 40Gbit/s to an AIC HA401-CP2 storage appliance running the RAIDIX software. The RAIDIX storage appliance connects via dual 6Gbit SAS links to four AIC XJ3000-4603S JBODs. Each JBOD houses 60 disks, providing one petabyte of capacity in a single rack.

To further ensure availability, the city contracted for the RAIDIX premium support plan, meeting its requirement for 24/7 support services. By providing around-the-clock access to the RAIDIX support team, the plan delivers very high levels of service and customer care, particularly because system maintenance can only be performed during off hours or on weekends.

The RAIDIX software puts an end to lost revenues by providing a resilient storage infrastructure that ensures stored video is intact and always available. Yongin now enjoys extraordinary data protection and the security of triple-parity RAID.

“With HD video continuously streaming, the city demanded fault tolerant operation,” said Kang. “With the RAIDIX storage engine, that’s what it got. Its RAIDIX premium support plan delivers additional peace of mind that the system will always perform reliably and effectively.”
Moreover, the RAIDIX powered system offers cost-efficient scalability that is nearly unlimited, an important consideration as Yongin plans to deploy another 2,000 HD video cameras. Administrators only need to plug new storage devices into the cluster and the RAIDIX scale-out NAS functionality will integrate the added capacity into the existing storage. Kang noted that “the city can easily double the capacity of the cluster and still require far less space in its data center than its prior system.”

For additional value, the multilingual, web-based RAIDIX user interface allows administrators to configure, monitor, and manage the storage system’s software and hardware. They can graph real-time statistics to verify performance and facilitate troubleshooting.
“RAIDIX delivered to Yongin far more storage in less space and for less money,” concluded Kang. “The solution improves efficiencies and lowers ownership costs, even for storing streaming 2K and 4K video. By avoiding hardware-based RAID controllers, RAIDIX provides a strong solution at a fraction of the cost of enterprise systems from leading vendors. RAIDIX exemplifies the value of software-based storage.”