As of today, server virtualization is one of the most efficient methods of deploying private and public clouds, development and testing environments, as well as corporate applications. Server virtualization enables decreased TCO due to power and space economy, eliminates hardware vendor lock-in and boosts operational up-time.

The RAIDIX solution for data storage in a virtual environment allows the administrator to facilitate and automate system management, and accomplish greater ROI and IT resources for every dollar invested into the corporate infrastructure.

The key storage parameters include:

VMware ESXi and the data storage system may be connected via versatile protocols — iSCSI, NFS, etc. Virtual machines (VM) may employ corresponding files (configuration and vDISKs) on all available datastores. At that, the administrator can make use of all VMWare’s storage functions (VMotion, VMware DRS, VMware HA and VMware Storage VMotion).

Performance depends on a server utilized for data storage (RAID-controller and drive functions). Due to the RAIDIX unique algorithms and efficient parallelization of calculations, RAIDIX unlocks maximum performance expected from specific hardware. Moreover, RAIDIX-based systems enable elastic scalability with no degradation in case of increasing number of VMs or heavy workloads. 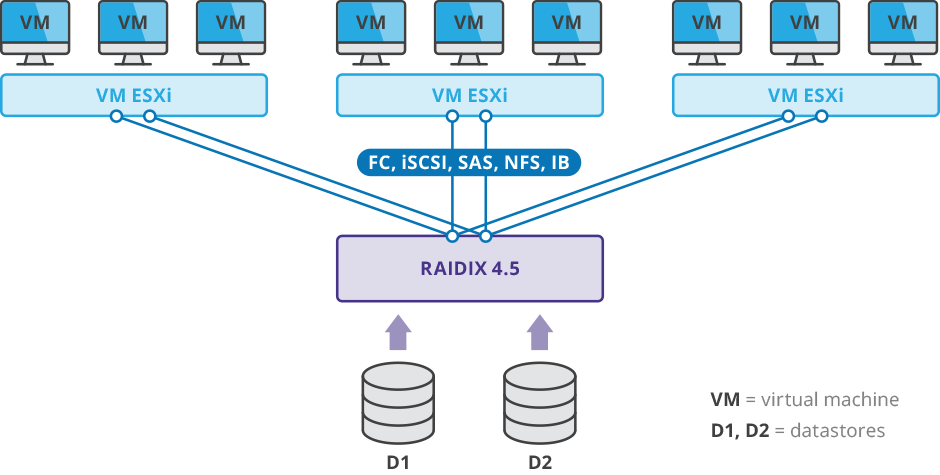 For increased performance in the enterprise environment, it’s advisable to initialize RAID 6 arrays (RAID 6i where “i” stands for initialization). During the initialization process, the disks are primarily written with zeros, allowing for accelerated processing of transactional operations.

To ensure fast failover, high velocity and reliability, RAIDIX recommends to activate the Advanced Reconstruction feature. This mechanism optimizes performance of read operations by eliminating the drives with the lowest read rates.

Advanced reconstruction can be used in two modes:

The first step is to configure a target (e.g., Fibre Channel). The target connects to VMware ESXi. The next step is configuration of datastores in the dual controller mode (Active-Active). In this mode, both nodes are active, they work in parallel and provide access to the same pool of drives. The nodes are hardware-agnostic components of the data storage system that include processors, cache memory, motherboards and may be combined into a cluster.

RAIDIX guarantees continuity of data access and provides fault-tolerance due to:

Nodes interact through InfiniBand, iSCSI (over Ethernet), SAS, and Fibre Channel interfaces that allow for data and cache status synchronization.

Due to bi-directional standby cache synchronization, the remote node always contains an up-to-date copy of data in the local node cache. Therefore, should one node fail, the other node will transparently take over the entire workload, allowing the administrator to fix errors on the fly.

Duplication of hardware components and interfaces provides protection against the following incidents:

Software errors detected on one of the nodes.

Sample Project in an IT company

The hardware infrastructure included 10 Supermicro servers with Broadcom HBA cards and Mellanox InfiniBand adapters. For synchronization purposes, ISCSI over InfiniBand was selected as the fastest method in this hardware configuration. ISCSI over Ethernet was used for failover.