Data storage in Video Surveillance implies multi-thread sequential operations. Each IP-camera generates a sequential data stream that is written into a video archive storage. This results in a considerable multi-thread write workload.

Playing video from the archive entails sequential read operations triggered by single or multiple streams. In terms of workloads, the storage performs its best when a project does not involve permanent video playback by various operators from multiple workstations. Real-time monitoring does not require permanent data reading, and archive videos are viewed one at a time — occasionally or on a regular basis. In this scenario, the predominant workload — 90 percent or above — will have to do with writing, and the data storage will reveal no significant reading load.

In an opposite case, when multiple videos are played back in parallel from versatile cameras (e.g., casino, stadium, mall, etc.), the system processes a multitude of concurrent read streams and boosts the overall storage workload. As a result, the same number of cameras will require a higher performing storage system, otherwise the administrator may need to cut down the quantity of cameras per array (controller).

While operating under high workloads, it’s crucial to balance out storage performance, density and costs. System performance depends on the number of drives and individual performance of each drive. As a rule, high-speed software-defined technology utilizing HDDs fully complies with sequential workload requirements. In combination with high-density JBOD enclosures, storage professionals create effective configurations that cater to a large number of parallel threads or high-definition streams.

Greater scalability requires implementation of cluster solutions, such as the system based on the RAIDIX management software and HyperFS. Aside from high performance and low latencies, the list of key features expected from a fully functional Scale-Out solution includes:

Hereinafter, one will find standard requirements for data storage infrastructures servicing 5,000–10,000 parallel HD streams and the corresponding solutions offered by the RAIDIX technology.

The modern video surveillance market grows exponentially and demands brand-new solutions that keep up with the pace. Apparently, CCTV system functionality should go beyond camera capacity and software capabilities and factor in the IT infrastructure required for servicing cutting-edge professional equipment.

Should it come to hundreds and thousands of video cameras, a single server or boxed solution will fail to deliver the coveted reliability — even more so when a system involves video analytics (detection, tracking and recognition), integration with POS solutions, access control, etc. These scenarios call for specialized surveillance software — VMS — that delivers high scalability, smooth support for a multitude of IP cameras as well essential video functions.

Let’s evaluate the requirements spanning system resources and the storage subsystem in large-scale Video Surveillance projects. This evaluation builds on the assumption that video servers receive, process and write video streams into an archive, and perform other essential VMS functions — without employing resource-intensive video analytics.

Picture display from IP-cameras for real-time monitoring and video playback should be performed from dedicated remote workstations, which will allow video servers a 50 percent workload cut. Remote workstations in Video Surveillance stand for powerful computers, such as graphic stations. These machines run special client software to ensure VMS connectivity and provide an ability to display a multitude of pictures on large screens.

As a basis for further calculations, we’ll take a stream generated by a single IP-camera via ONVIF (an open standard that ensures interoperability of IP-cameras with VMS), with 1MPX HD definition, basic H.265 codec, frequency rate of 25 fps and high frame activity. Average traffic volume in this configuration constitutes 2.84 Mbit/s.

Challenges and the Solution

The RAIDIX software and COTS components

In the foundation of the suggested CCTV storage lies the RAIDIX Software-Defined Storage technology that enables the user to build reliable, high-performance, and fault-tolerant storage infrastructures. The use of commodity x64 hardware and high-density chassis allows a RAIDIX-based system to attain minimum TCO, $/GB and $/IOPS.

A 5,000+ HD camera configuration may include х64 servers of choice and the following components:

RAIDIX enables flexible scalability of the video surveillance infrastructure. The system scales linearly up to 1800ТB (raw volume), and up to 16ZB when using the high-performance scale-out technology (HyperFS). At that, infrastructure extension does not entail any IO downtime and performs with full transparency to applications communicating with the storage system. The system can scale with the increments of a 12-disk batch, 60-disk JBOD enclosure, or a separate node.

The RAIDIX performance is optimized for storing large volumes of video data. Peak performance may reach 40GB/s for a standard rack in 42U. RAIDIX also delivers maximum efficiency when using commodity-off-the-shelf hardware by paralleling input/output operations.

High availability of the RAIDIX storage builds on using HA configurations of RAID 6, RAID 7.3 and RAID N+M on read/write. The technology sustains high performance even if hardware fails or the system undergoes array reconstruction.

Even partial data loss on saving video information may lead to losing an entire video stream. The use of proprietary RAID calculation algorithms, such as RAID 6 or RAID 7.3, allows the system to accomplish record-high speeds and data integrity. The array remains fully functional and reveals no performance degradation even if three disks fail in a RAID group.

The data storage system ensures full fault-tolerance in case of multiple disk or enclosure failures, hidden errors in disk sectors or human error. The RAIDIX solutions have no single point of failure (SPOF) and ensure high data availability at 99,999 and higher.

The Advanced Reconstruction feature allows the system to sustain required data rate even in degraded mode and during RAID reconstruction. The reconstruction process does not impact other disks or overall system performance. RAIDIX can permanently track 1/2048th part of the disk and restore damaged data only — on the fly. Also, reconstruction priorities may be tweaked in real time.

The use of standard x64 hardware and high-density chassis allows for minimal ТСО, $/GB and $/IOps. Compliance with COTS hardware enables the user to pick the optimal configuration for building high-performance fault-tolerant data storage systems in Video Surveillance.

Organization of a storage network

In a simple scenario, a storage network can build on two high-performance 10GbE (Ethernet, 10Gbit/s) switches and two allocated 1–10GbE ports for each video server. The NFS and iSCSI protocols may be used for connectivity. Some cases demanding greater performance may involve convergent Ethernet or InfiniBand adapters with RDMA (SRP, iSER, RoCE) support, as well as corresponding switches. At that, 10Gbit/s ports will suffice on the server level whereas the switch level will require no less than 40Gbit/s.

In this scenario, we opt in for a large-scale RAIDIX-based storage system that enables JBOD connectivity, high performance and support for multiple HD threads. Full data integrity is achieved with the use of RAIDIX patented algorithms, including a double-parity RAID 6 level. RAID 6 ensure data continuity and sustainable performance even in case two drives fail in a RAID-group.

Below, one can find a CCTV storage configuration for 10,000 HD cameras (1MPX) when using RAID 6: 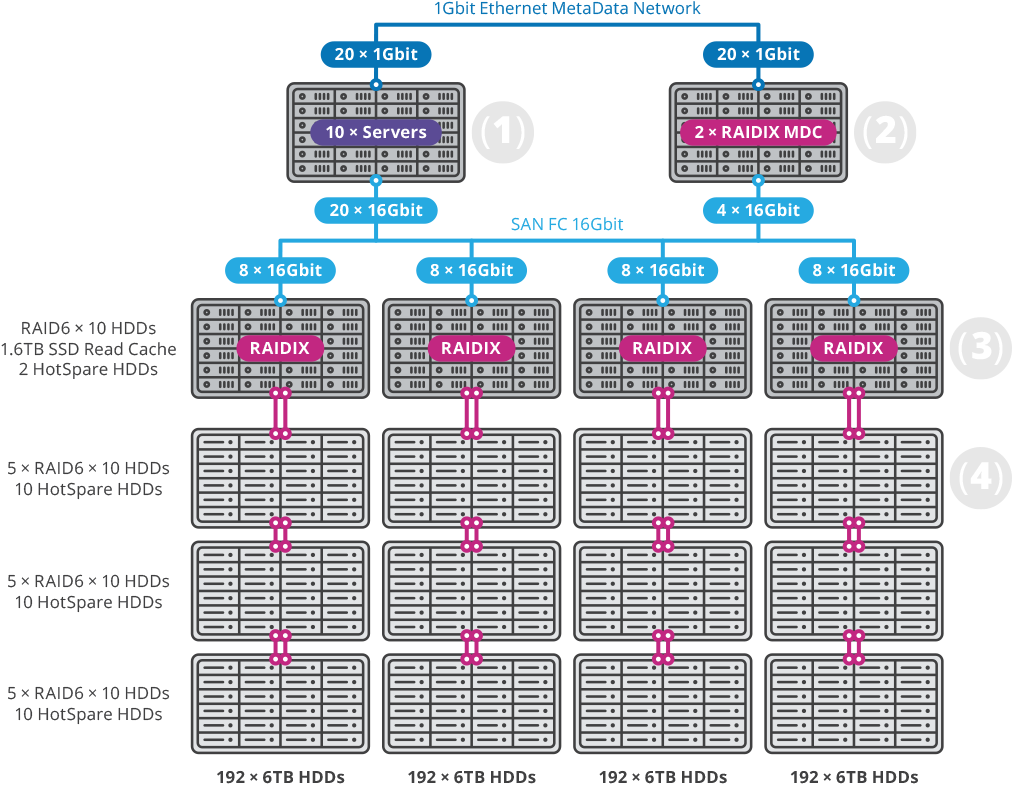 As we mentioned before, this task of building high-end storage clusters may go beyond the functionality of traditional file systems (FS). Classic FS impose the following limitations:

These issues can be resolved with the aid of cluster file systems. The HyperFS system from Scale Logic, for instance, ensures high scalability with full process transparency for the customer and shared access to data from various OS’s (in particular, through a dedicated NAS-gateway). Integrated with HyperFS, the RAIDIX software allows for a single namespace for SAN and NAS.

Technical benefits of the comprehensive solution include:

The system encompasses an optional metadata controller (MDC) with redundancy structure as well as a full-redundancy SAN-structure with metadata mirroring. HyperFS SAN also supports multi-path configurations in the Fibre Channel and iSCSI environments. The system reveals no SPOF and ensures high storage reliability.

The system based on RAIDIX and HyperFS provides customers with a high-performance solution featuring a single namespace, concurrent access via various protocols, low latencies, high scalability, file and block access to the same data.

Technical characteristics of the scale-out system